At the Hope Center, we sang songs, danced, prayed, read the bible in multiple languages, shared bible stories, and shared personal stories of how the Lord has molded the hearts of each and every one of us.  After two days of sharing, we asked those in attendance if they had something they wanted to share with us – we had been doing most of the talking.  Sure enough, a hand shot up in the crowd of Cambodian women.  Meet So Maly…

On a chilly morning at the Hope Center, So Maly stands up and begins to share a heart wrenching story of survival of the Khmer Rouge.  The Communist Party of Kampuchea, otherwise known as Khmer Rouge, took control of Cambodia on April 17, 1975 and ruled until 1979 – during many of our lives.  While the Khmer Rouge was in power, they set up policies that disregarded human life and produced repression and massacres on a massive scale.  They turned the country into a huge “detention center,” which later became a graveyard for nearly two million people. 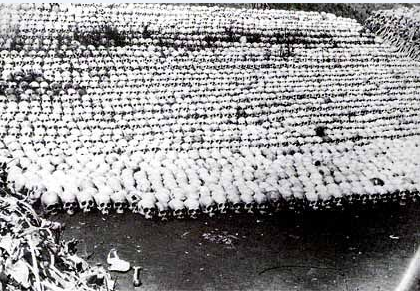 Soon after seizing power, they arrested and killed thousands, any were held in prisons, where they were detained, interrogated, tortured and executed. The most important prison in Cambodia, known as S-21, held approximately 14,000 prisoners while in operation. Only about 12 survived. The Khmer Rouge continued to exist until 1999 when all of its leaders had defected to the Royal Government of Cambodia, been arrested, or had died. But their legacy remains and women like Noit Hyde and So Maly lived to tell stories of survival of such a brutal regime.

Through tears, So Maly bravely shared and we join her in sobbing before we even heard the English translation of her words.  Beyond survival, the most precious moment in her story was when she said “after the Khmer Rouge I wanted to go to the USA, but now after hearing so many stories I want to go to HEAVEN!” So Maly knows that life beyond this world only exist through Jesus Christ and because of him she knows Heaven is her true home.

But, we are “Not Home Yet.”  These women will not flee Cambodia for the USA, instead they will stay there, for now, continuing God’s work in their lives and sharing the gospel message to others looking for a home away from Cambodia and the destruction left over from the Khmer Rouge.  These women are a voice of survival and a bright light for the darkness left over because they know the true savior of the world, Jesus.

So Maly and I had a moment to sit and share a little with each other that day.  We had two separate bibles, two separate languages, and yet we were speaking clear as day.  She shared John 3:16 in her language while I turned there in my bible.  Then I shared John 16:33 from my language and she read it out loud in hers.  How beautiful to communicate though scripture the promises of our common Father in Heaven, “I have told you these things, so that in me you may have peace.  In this world, you will have trouble.  But take heart!  I have overcome the world.” We may not be “home yet,” but as sisters in Christ we have the same mission on earth with the same destination.  I can’t wait!

All I know is I’m not home yet, this is not where I belong.

Take this world and give me Jesus, this is not where I belong.

This entry was posted in February 2016 Trip. Bookmark the permalink.

3 Responses to Not Home Yet